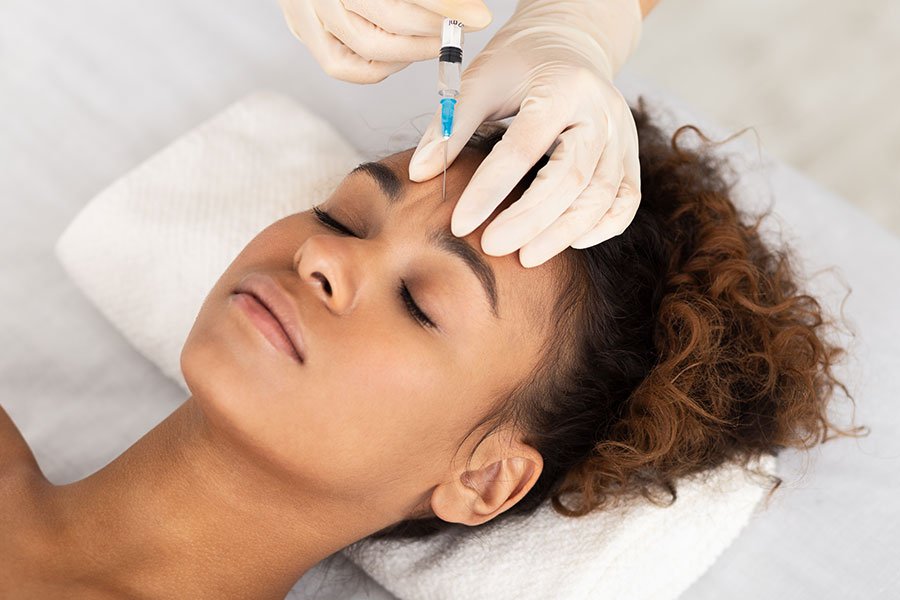 We currently offer the brand XEOMIN® for “Botox” (botulinum) injections.

Botox injections are used not only for therapeutic purposes but for cosmetic ones too?

Unlike fillers, which are superficially injected just beneath the skin, Botox is injected directly into the muscle. Because Botox is made of a neurotoxin, it blocks signals between the muscle and the brain, ultimately preventing muscle contraction in a localized area. When the muscle relaxes, wrinkles smooth out and soften. Performed correctly, these injections only affect targeted muscles while still allowing for facial expression. Botox can be used for any type of wrinkle that has not been caused by sun damage or stretching of the skin due to gravity. Results are usually best on expression lines, such as those around the eyes and forehead.

That 11 million women have undergone Botox?

In fact, the American Society of Plastic Surgeons reports that it is the most common cosmetic treatment requested in America, with numbers at an all-time high. More than a million treatments are performed every year, and it isn’t just the rich and famous indulging in the liquid facelift. People of all economic backgrounds get Botox because of its affordability.

Am I a candidate for Botox treatments?

If you are between the ages of 18 and 65, consult with your dermatologist to find out if Botox is right for you. The best candidates for cosmetic Botox treatments are usually men and women bothered by facial lines and wrinkles – particularly those along the forehead and between the eyes. You should not get Botox injections if you are pregnant or breastfeeding, or if you suffer from any type of neurological disease.

What should I expect when getting Botox?

Botox injections are in-office procedures performed in just a few minutes. In fact, you can schedule a Botox injection for your lunch hour or on your way home from work. Injections use a very fine needle, which is inserted into the facial muscles. There is very little discomfort during the injection, and anesthesia is not necessary.

Are there any special instructions I will need to follow after getting Botox?

There is a minimal recovery period of approximately 48 hours after getting Botox. During this time, you may experience bruising or headaches. Avoid rubbing your face in areas treated with Botox, and do not lie down for the first few hours after the injections. Keep in mind that results from Botox – though significant – usually begin to fade within 4 to 6 months. You’ll need to return for retreatment periodically.

Xeomin is a highly purified form of botulinum toxin. Compared to other botulinum toxins, it has a reduced risk of building up a tolerance over time and less chance of allergic reaction. It also migrates further and faster to effectively work upon all facial areas upon injection.

What is the difference between botox, xeomin, and dysport?

All three are effective treatments that originate from the same source bacterium, clostridium botulinum. They are synthesized as botulinum toxin type A, the paralyzing agent or neurotoxin that is administered. Botox, Dysport, and Xeomin are all FDA approved and aesthetically designed to smooth and diminish wrinkles.

When Allergan’s Botox was FDA approved for anti-aging benefits over ten years ago, it was the only brand of its kind on the market in the United States. Botox is a leading cosmetic treatment that drastically reduces the appearance of crow’s feet, lines on the forehead and frown lines.

However, two other companies have entered the market and are having tremendous success: Dysport and Xeomin. Dysport came to market after Botox. Noted benefits of Dysport include that it spreads more than Botox and patients who have stopped responding to Botox commonly use it. It is also injected at a different strength and affects a slightly larger area than Botox and Xeomin.

Yet with both products (Botox & Dysport) containing an accessory protein to carry the botulinum toxin, the body has the ability to build up antibodies over time, causing the results to diminish after continuous usage. The benefit of Xeomin is that it contains no accessory protein, making it a “pure” version of the botulinum toxin and reducing the risk of an allergic reaction or natural resistance. This solitary agent migrates further and faster to effectively work upon all facial areas upon injection. There is less risk of an allergic reaction or rejection due to the absence of protein additives.

In comparison, Botox and Dysport are considered ‘heavier’ because they contain added proteins. These proteins are for protection and are clustered around the botulinum to enable them to last a little longer. However, the clinical argument is that these protective proteins may also shield the active part of the neurotoxin thereby minimizing product effectiveness. Xeomin is the most similar to Botox when measuring units to units, whereas Dysport requires more units at a lower cost per unit. Both Botox and Xeomin may require up to two weeks for full treatment and in most cases Dysport has a much quicker onset for those patients wanting faster results.

All three neurotoxins on the market can last from three to six months, per treatment, varying from patient to patient. It has been reported that Dysport typically takes two to three days until the effects of the treatment are seen. Botox takes seven to ten days, while Xeomin takes five to six days. Dysport may be the best option in areas where several injections are needed because of its easy spreading to cover a greater area on the face. In the areas where the spread needs to be minimized, Botox may be the best option to concentrate on deeper wrinkling.

which areas do you inject?

There is a minimal recovery period of approximately 48 hours after getting Botox. During this time, you may experience bruising or headaches. Avoid rubbing your face in areas treated with Botox, and do not lie down for the first few hours after the injections. Keep in mind that results from Botox – though significant – usually begin to fade within 4 to 6 months. You’ll need to return for retreatment periodically.